Pathways to Redemption: ECF Inmate James Floyd earns certificates from Barton Community College, looks to a brighter future with his family after 12 years behind bars 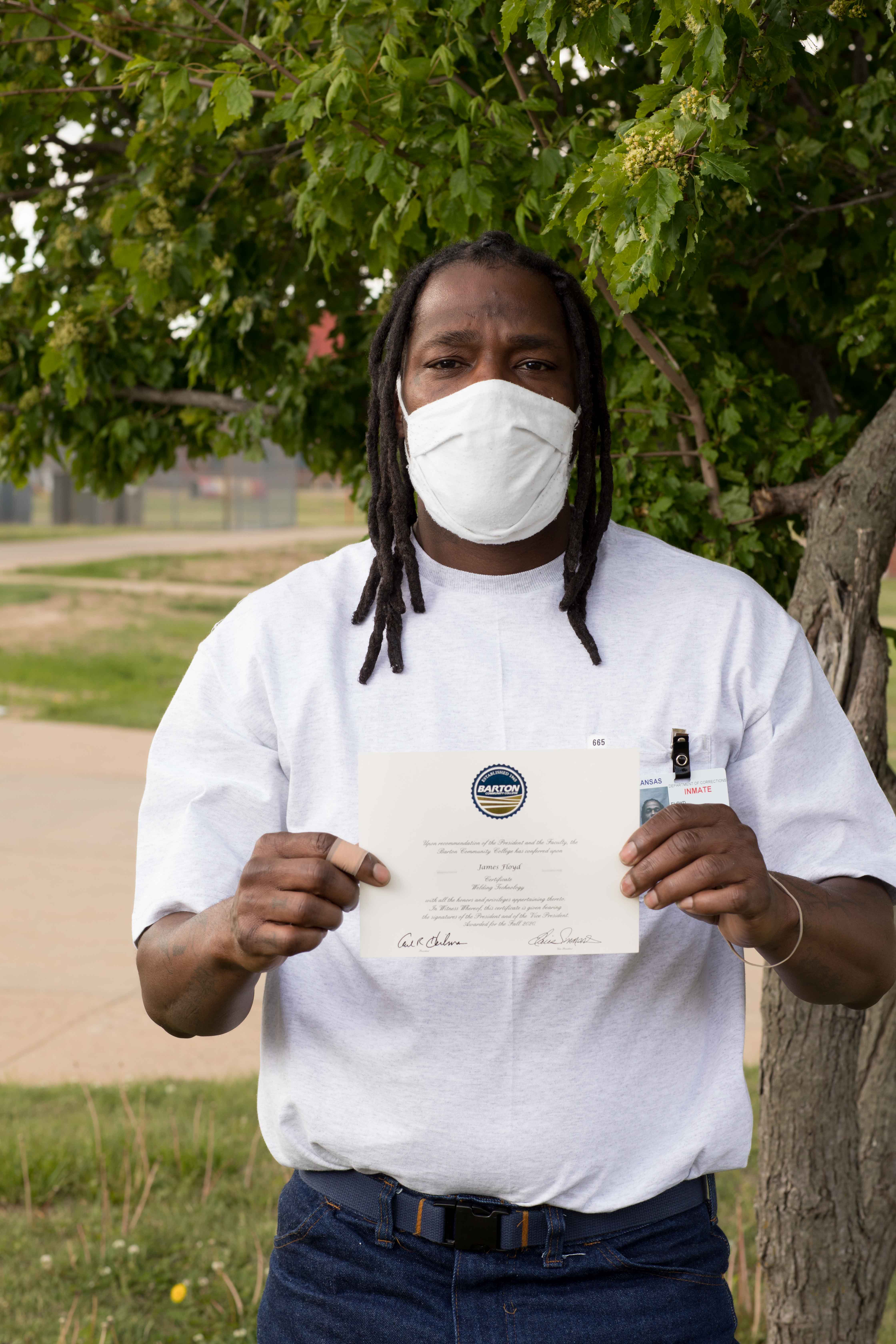 May 25, 2021
Story and portrait by Brandon Steinert

This is the first of four stories about how Barton's educational programs in correctional facilities aim to help inmates lead productive lives upon release.

James Floyd has missed 10 years of his children’s lives serving a 12-year sentence after his conviction in 2011. His oldest is now 20; his youngest, 16.

He will release in two years, and he is determined to build a legitimate life for himself and his family when the time comes. During his time at Ellsworth Correctional Facility, he has finished both a welding certificate and a high school equivalency degree, which is the same as a high school diploma.

“I have my children waiting on me,” he said. “We’ve missed so many years. I’m looking forward to having a relationship with them. I want to show them where I came from and where I’m at now, like ‘look, I’ve made some bad choices but I’ve made something better out of myself.’”

His version of a better life has a couple of steps, which starts with him putting his newfound welding skills to work so he can afford the training to do what he considers to be his calling.

“Having a welding degree and a high school diploma will open so many doors for me,” he said. “Welding will be kind of a crutch. It will get me stable financially, but won’t be my career. I really want to go pursue being a barber. It’s a passion of mine and I’m good at it.”

Most inmates in the correctional system will be released back into society, and many are re-admitted after repeating an offense or committing a new crime – a trend called recidivism. The Kansas three-year recidivism rate is 33 percent.

The difference between a world where Floyd might become a statistic as a repeat offender, and one where he re-enters society as a contributing and productive citizen, is the quality of opportunity available to him at the time of transition.

Enter the State of Kansas’ Pathway to Career High School Equivalency Program and a partnership between the Kansas Department of Corrections and Barton Community College. Inmates can take courses and select career and technical programs offered by Barton, in a face-to-face setting while incarcerated. The Pathway to Career program allows students to earn a high school equivalency credential by passing certain college courses rather than requiring the credential before being allowed to take college-level classes.

The hoped-for result is a more successful transition to society for releasing inmates, which translates to reduced recidivism. Floyd was one of the first four to complete the program. All four utilized Barton's program at ECF.

Floyd said his gratitude for these resources and the opportunities they afford is so potent it’s difficult to put it into words.

“I’m 41 years old and I never thought I would get my diploma,” he said. “I’m just so thankful. I told my grandma on the phone and she just started crying. To me, this is everything. I grew up with a learning disability, but now I’ve done something I can be proud of, and I’m motivated to get out and do more.

For more information, go to https://bartonccc.edu/basics.